Award-winning comedian, writer, creator and star of BBC2’s Hebburn and Radio 4’s Jason Cook’s School of Hard Knocks returns with a show about, well, being broken. Martin Walker catches up with the much admired comic, ahead of performing his latest Edinburgh Festival Fringe show.

You created and co-wrote the semi-autobiographical BBC TV Sitcom Hebburn. Any news of more episodes on the way?

“Hebburn is finished in the UK for now, with the BBC saying they don’t want to commission a third series. In the US, Adam Sandler’s TV Company have bought it. The US version will be set in Pennsylvania I think, with an American cast.”

“Well I had a sort of breakdown in many ways. So there’s some of that in the show.

“Besides, my kid doesn’t say funny things. She’s just a three year old kid. She’s got no knowledge of timing or pace. I mean some of her lines are just OK… but he’s rubbish at call-backs.”

“I always give her five starts in front of my wife.

“But this is not a dad show. Lots of people do them and do them very well, I just feel it’s a well-trodden path. There are lots of blokes like me who live in the shadow of their dad. But that’s a very small part of my show.

“My shows always have a strong theme. I like to link everything together. I spend my pre-Edinburgh time ticking off jokes, going I can’t do that, can’t do that one either, that one doesn’t apply. You can crowbar stuff in. I remember doing just that a few years ago. It was a ten minute bit that I really liked. I thought, this is going to kill, I really love this bit. But it didn’t fit, and the way to get to it was just embarrassing. It was like, ‘So talking of fish and chips…’”

Who are your audience?

“They are a rag tag bunch of miss-fits. I’m a storytelling comic and I attract the kind of people who like stories rather than just jokes. When I do tours and solo shows and stuff I always look out to the audience and think, ‘who are you all?’

“But I’m a story teller. Dave Allen, Billy Connolly – people like that. And I like stories that have a bit of an emotional punch.”

You relate stories about yourself. Do you worry that you’ll wake up one day and have nothing to say?

“It’s hard to find things to write about if you go through a period where very little happens to you. A comic’s life offstage can be quite boring. People ask, ‘what did you do last night?’ and true answer is, ‘I drove home from a gig with a big sense of self-loathing’. Or ‘what did you do yesterday?’ the truth is, ‘I got up at lunch time, had a sandwich with my wife, got into my car and fucked off to somewhere else.’”

“I was always a comedy fan. Turned out that my friend was running a stand-up competition. I didn’t know that comedy clubs existed, I thought that stand-ups were born on the telly. So I went along just to watch and that was me. I went every night that the club was open after that.

“I’d go on a Friday and a Saturday – when it was the same acts. I learned the compare’s set. My mates would say, ‘what you doing on Saturday’ and I’d go, ‘off to the comedy club do you want to come?’ and they’d say, ‘no’. So I was the guy who went on his own.

“I was in the Merchant Navy, and I would write wee comedy sketches whilst at sea. A mate was in a sketch group so I’d get home and see my sketches performed and I said to myself, ‘that’s what I want to do’.

“So I quit my job, sold my house, moved back in with my mam. I was twenty eight.”

That must have been good for material.

“It was good for material, and I got funny very quickly.

“She’s very proud of me actually, my mam. My parents have always been one hundred percent supportive. When my dad was still around he was great. He used to drive me around to gigs and stuff. He used to look at Chortle and Broadway Baby and stuff and he used to text me reviews before anybody else knew they were out.

“He used to ring me up and say, ‘you’ve got a four in…’ whatever publication it was, ‘reads like a five though!’”

You started as a writer then?

“Yes, well when I first joined the sketch show after leaving the Merchant Navy, there would be loads of different contributors to the script. But it evolved to the point where I was writing the whole show.

“So the sketch show morphed into this live sitcom. It was the story of the world’s worst circus. That was the whole theme. That ran for almost three years. Thirty thousand words every month! And we never repeated a joke. So that was my training. It’s where I learned structure and the rest.”

What keeps bringing you back to Edinburgh?

“As a story teller, I like to work with a narrative. A structure. A three act kind of theme. Edinburgh is the best place anywhere to perform that kind of material. You can get so much deeper and more personal than in a club set.

“As a writer, structure is so important. People are excited for the first five minutes. At around forty minutes folk get numb bum so something exciting has to happen. And then a big finale that does something, anything. A pay off.”

So are you a writer or a comedian first?

“I just see myself as a bloke who used to have a proper job and now doesn’t. It’s not real work this. I really isn’t. I used to do sixteen hour shifts in an engine room.

“I do love doing stand-up. I like to be in a room with a live audience, juggling electricity. But I do find writing incredibly satisfying as well.

“I did a lot of comparing which I enjoyed, but sometimes more about being a policeman than a comedian. I prefer to tell stories, which isn’t what an MC is there to do. But then again, doing that taught me a lot.

“A long time ago now I got chatting to an audience member who was a wheelchair user, and I could feel the audience getting tense. I remember saying to him, ‘you and I are the only ones who are comfortable here’. I asked him to sit in the front row in the centre. We were talking about how wheelchair users always get to see shows from the side. So the audience was listening and you can feel them going, ‘… actually it’s fine. We don’t feel uncomfortable any more’ So a good compare brings people together.

“Since then I always asked wheelchair users if they’d like to sit at the front. They almost always do. I once got a guy who kept making involuntary noises. I just incorporated it into my act. Every time he made a noise I’d say, ‘I’m taking that as a laugh’. One time when I said that, he just shook his head. So I’m like, ‘Oh fuck, you’re heckling me now.’”

I ask everybody this…. If you were curating your own stand-up TV show, who would be your guests?”

“I wouldn’t have any fucking guests!

“Who would I have? Two Canadians, Sean Collins and Glenn Moore. Sean I have seen playing some of the roughest gigs in Newcastle and blowing them away. Chris Ramsey I’d have on. When he’s popping he’s annoyingly good.

Kitty Flanegan – I did a tour with her, and one night they wouldn’t let a woman headline. It was two acts in the first half, two in the second. She used to close the first half and we used to thank God for that interval because she’s brilliant and impossible to follow. She’s a writer and a comic, I really admire her.

And yes, Sarah Milligan. I’ve died a couple of times trying to follow her. And as a musical guest. Boothy Graffoe. Silly. Astute. Brilliant. He’s an artist. I’d put him up there with Simon Munnery as someone who keeps reinventing comedy.” 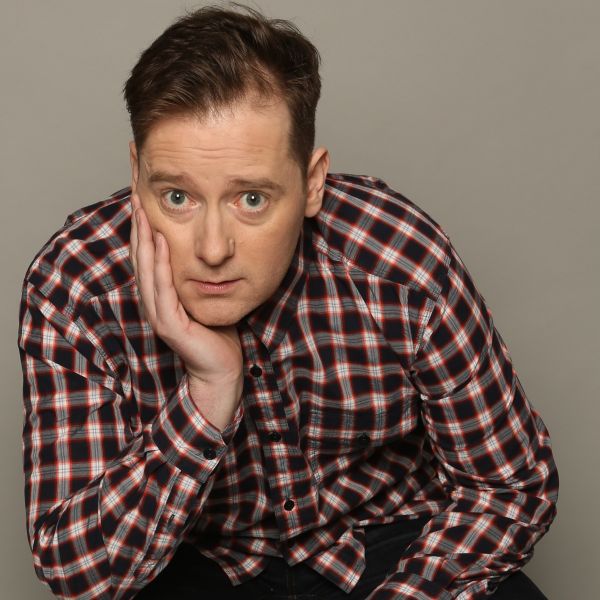