Mr. Twonkey’s show this year is Twonkey’s Christmas in the Jungle. Its a show about being taken to the jungle for Christmas to play an imaginary fringe festival. We needed to know more so we sent Mr. Twonkey (AKA Paul Vickers) some questions.

Hello Mr. Twonkey. Tell me about Twonkey’s Christmas in the Jungle.

I do a show with puppets, Songs and high jinx. It’s silly but it always plans to take a visitor away to a new place for a few special moments. The key is to let go of your moorings and let me float you to a safe and often strange place. This year I am put in great danger by an insider and double-crossed. I was told by a friend to use the ‘enemy within’ plot dynamic used by big Hollywood thrillers. Parts of the show will be glow in the dark which is a new area for me also. Plus, I like the idea of doing an out of season Christmas show.

Everything. I’ve gone too far to go back, if this doesn’t work I’m done for.

More and more I’m thinking atmospheres and the need to pull people in on a wire and ping them back out in a different mood/time zone and headspace.

The thing is if I don’t remember a show that’s a good thing but if I can recall every single moment it means it’s gone badly wrong. I’ve been performing for a long time so it would be more like a Top 10 Best/Worst gigs which there is not really space for it here. I don’t enjoy getting physical attacked, called an idiot and having all my stuff broken and stolen but no one does. I recall doing a gig just after I realized all my merchandise had been stolen and just could not focus on the gig I was in really worried bad mood. So if you were looking for stories about people who have been in really big trouble yet still soldier on that would be a good one yeah that was a total nightmare. I had a great gig in Shoreditch in London at the Confuse comedy night a few years back everything just clicked into place I played a blinder after a long train journey too.

It was great getting five stars in The Stage last year for my play Jennifer’s Robot Arm everyone had worked so hard, I even cried. My worst everyone gets a bad review from time to time if you’re in the game long enough they always hurt but you can learn from them sometimes too if they’re well written. I’m not going to go naming names here the Edinburgh Fringe is a small world.

A rich but unhappy man.

Fair World: A History of World’s Fairs and Expositions, from London to Shanghai by Paul Greenhalgh.

What’s a philosophy you stand by?

As long as you are a little bit down, or even, it’s fine. From Comic Martin Soan.

I’ve always wanted to do a show called Recording the Impossible that tries to do just that. It would feature things like what does the Holy Grail sound like? If the B.B.C jumped in I’m sure I could find a great cast. C’mon guys it’s now or never. 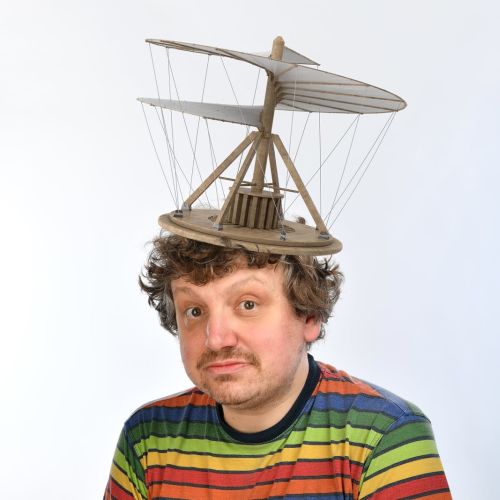