To some Sean Hughes is perhaps best known for his popular 90’s Channel 4 comedy, Sean’s Show. His career defining show Life Becomes Noises, is out on DVD. The follow up, Penguins will be released in the autumn

“Penguins is about so many things, but the title alludes to how at age four we are abandoned overnight in the foster of strangers for up to seven hours a day as we are sent to school – and how still, like penguins, we let society tell us how to behave.”

“Nothing is off limits, if it feels right with in the show. I am one of the few that thinks comedy is magical in the sense that comedy should hold a mirror up to society.”

I ask about Chris Evans of Go faster Stripe, who produces Sean’s DVDs.

Sean also hosts a popular podcast, called Under the Radar.

“I love doing this as I love broadcasting and I’m totally in control of it. It’s simply an eavesdrop on a conversation. Subscribe as I’m very proud of it.”

I wonder what Sean thinks of current TV comedy.

“Strangely, stand up gets so watered down on TV that I think it best to leave it in the realm of live performance. There is never anything as good as seeing a comic live.” 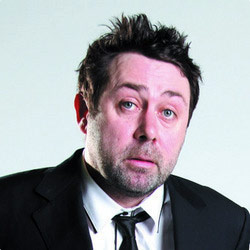