Rob Oldham’s Brink is a stand-up show about family, politics, and growing up. There are also two jokes about bums. Our appetite wetted, we asked Rob a bunch of questions.

Hi Rob. Tell me about Brink.

Brink has been written over the last year after I moved back to London. It looks a lot at family, nostalgia, and growing up, and how you end up being you. I have drawn a lot of inspiration from the varyingly awful and lovely people of the metropolitan elite, and I do a great big satire in the middle of the show. There’s a fair amount of politics too, but from a slightly surreal angle. The show has music built into it, so it’s not just me talking for forty minutes.

Chips. So many chips. And blocking all foot traffic through the city centre by standing there handing out A6 pieces of paper.

My parents, because they get on with things and they are very kind.

Being heckled by an audience of three people at a gig in a service station.

I’ve had ‘Diamond ability’ but also ‘Rushed mumbling over a poor sound system’. I like to think both are true of my act.

I’d probably do some more studying if I could.

Jazz by Toni Morrison. It was really good.

Are you confident about this year’s Fringe?

Well, I’ve looked through the Edinburgh Fringe guide and I think my show where I, a young man, tell jokes into a microphone, will really stand out!

It’s QI but with dogs. All the dogs are dressed as humans but Stephen Fry is dressed as a dog. It’s chaotic and potentially fatal. 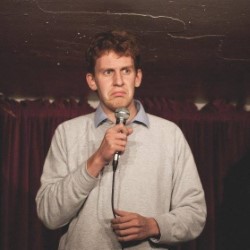