My show is called Little Drummer Boy and it’s about the trials and tribulations of growing up as the youngest child in a competitive family of six. How I showed great promise as a drummer as a child but was directed into the academic route like my siblings. It’s a tale of sibling rivalry, being aspiring middle class, growing up in the black country and finding a new love in stand up comedy.

Tell me about your previous Edinburgh experiences

I’ve been coming to Edinburgh for the last 13 years as a punter but also as a performer. I did three split bills/compilations about 10 years ago and my first solo show last year for a short run.

I obviously love and admire a lot of great comics like Frank Skinner, Sean Lock and Stewart Lee, but I’m also a keen listener of music and a big fan of jazz drumming, my poster this year is an attempt to emulate some of the album covers from Blue Note series. So, I love people like Elvin Jones, Max Roach, Mitch Mitchell (Hendrix’s drummer) to name but a few.

I think drumming and comedy have a real cross over, don’t know why there’s just something about drummers!

I wrote throughout lockdown and did a number of online gigs. They were nothing like the real thing, but it did mean I had to write and perform and that kept me going, so I didn’t struggle with going back.

I’d love to record an interview with you at some point in or around the fringe, 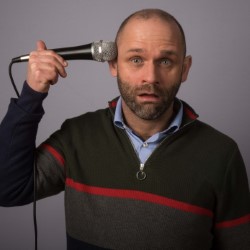