Want to know what the supernatural is all about? Martin Walker exchanges emails with bonkers mystic Madame Magenta, who is bringing her show to Edinburgh this August.

Tell us about your Edinburgh show.

“Of course, my darling! My show is EXPERIENTIAL, it is IMMERSIVE: audience members will be sat IN a room, EXPERIENCING a show. If that sounds like your sort of thing, come on down to Madame Magenta: Libros Mystica in the French Quarter, Voodoo Rooms at 2.40pm every day in August as part of the PBH Free Fringe.”

Tell us your best, worst experiences on stage.

“Well! During one of my live shows I became possessed by the spirit of Aleister Crowley: infamous dark magician, pervert, and mountaineer. I’m not sure what happened next: tis a blur of tangled limbs, smoking crampons and scat. The room and my reputation were destroyed. Every single member of the audience sued.

“Whereas my worst gig was at Slam at the Clam, a poetry night run by deranged supply teachers. My GOD, isn’t poetry embarrassing? I recorded one of the other ‘acts’ from The Clam so I could watch it in case I ever felt tempted to do another poetry night, have a look.” (see YouTube link below)

I hear that you’re estranged from your daughter, MoonFruit SpacePerm. How did that happen, and is it true that she has changed her name to Lindsay Sharman?

“It’s true that, in the past, I have said that I am ‘estranged’ from Moonfruit, but actually I still see her most days, as she lives in my house. And she helps run my website and fan-club. So perhaps ‘estranged’ is a little strong: it’s more that I’m deeply, deeply disappointed in her.”

And you have a book coming out?

“It’s coming out at the end of June, and it’s called ‘Magenta’. My publisher described it as ‘50 Shades’ meets ‘The Very Hungry Caterpillar’ meets ‘Paradise Lost’. You’ll be able to buy it straight from my website and from me at my show in Edinburgh!

If you were curating a spiritualist/stand up show for television, who would be your guests?

“Aleister Crowley of course. And perhaps Samantha Mumba because WHAT HAPPENED TO HER?” 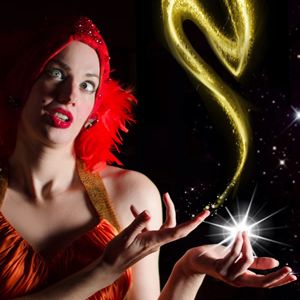