Ryan Lane Will Be There Now In A Minute, is a character comedy show based entirely on my early life growing up in the rural and isolated town of Llanidloes, mid-Wales. It also examines my own queerness in Wales and the myths that surround national identity. A ridiculous, whip smart satire with wigs, water-proofs and welsh witches. I say think Under Milk Wood meets The League of Gentlemen meets Clueless (only because I like that film. There was once a plaid skirt, but it had to go).

Apart from suffering terrible FOMO as all my close friends are there, I always miss the Edinburgh Fringe distinct atmosphere. It never stops, which of course can sometimes be completely overwhelming. But there is always somewhere to hide if you need to (I highly recommend the graveyard at Greyfriar’s Bobby). It’s very much performers living cheek by jowl, so you have to just breathe and accept the madness. And there is always someone new to add to the list of inspirations.

Edinburgh has always been one of my favourite cities since I first came here in 2010. I always stay with my friend who lives in Morningside- I would not be able to afford the fringe rent so I am super thankful- and there is this amazing supermarket there called Waitrose. It’s super overpriced, but they sell this amazing chocolate milk. Highly recommend.

The women who run the night shift at the 24 hour bagal shop on Stoke Newington High Street? Or maybe the nurses at Hommerton Sexual Health Clinic who regularly calm all my anxieties. But comedy inspirations are Julia Davis, Natalie Palamides and Rob Carter along theatre companies like Told By An Idiot and Complicite. But most of my inspiration just comes from my family back in Wales and this show is very much an ode to them- even the title comes from one of their annoying sayings. The script is so silly and people never believe me that so much of it is actually verbatim.

If you had to be a famous Edinburgh resident, who would you be?

Muriel Spark (or the Mary of Mary’s Milk Bar- surely the wealthiest person in the city by now). 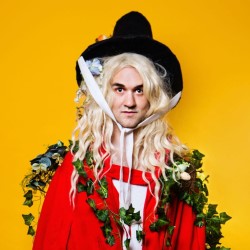