Tell me about your 2022 Edinburgh Festival Fringe show, Cake.

Cake is my first hour of stand-up and it’s all about my upbringing, queerness, masculinity and, most importantly, weddings. Back in 2020, I was set to have a big, intricate wedding with 170 guests and all the tacky trimmings a wedding normally has. Then because of the pandemic, we had to cancel it all. Annoyingly, I’d already written my fringe show about that big spectacular wedding, which was then also cancelled.

Now the fringe is back, and I’m happy to say I’ve now had my happy wedding day, though it was very different to what my husband and I had planned. And that’s what Cake is all about, expectations vs reality and embracing that things might not go how you thought they would but that doesn’t necessarily make them any less spectacular.

Congratulations on your marriage! What does your partner think of Cake? Do they mind having their marriage used as the basis for a comedy show?

Thank you! We’re still very happy about it all.

It’d be quite awkward if he thought the show was terrible, wouldn’t it? Fortunately, I think he thinks it’s quite good. He’s always been very supportive of me pursuing comedy, which isn’t always an easy thing to support. Lots of late nights in far away towns. Sometimes it feels like I’m never home, which he cheekily says is the secret to a happy marriage. Just a solid three days a week together, no more, no less. I won’t say if I agree with that…

But no, he doesn’t mind me doing a whole show about our marriage. I hope audiences that come to the show see that it’s full of joy and happiness and that’s largely down to him being a lovely person. If I spent an hour just slagging him off, he might feel differently…

You’re an accomplished a stand-up comedian, writer, and presenter. Which comes first and why?

I love that getting into stand-up has led me to try all these different things within the broader comedy industry and has got me to explore these other skills I didn’t think I had. I think stand-up is probably always going to be the first love and the thing I’ll keep doing the most. It’s hard to explain sometimes but the feeling of confidence I have when I’m on stage is so addictive. Mostly because I’ve not always been like that, especially off-stage. I was just quite a shy, lanky, gay guy who wouldn’t really talk to people but with a mic in hand, I can look at the biggest, manliest guy in the club and absolutely tear him to shreds. But, like, in an adorable way…

Having said all that, my dream job is to be a TV Presenter but specifically the one who gets to host the Eurovision Song Contest. So let’s see how that goes for me.

Tell me about the podcast, I’ve Had a Rosé, Let’s Talk About Feelings.

Ooh, talking about my podcast, I feel like a proper male comic now! I’ve Had a Rosé, Let’s Talk About Feelings is a show where I interview my favourite comics but specifically about how they manage their emotions and feelings.

Interestingly, this was one of my lockdown projects in-between cancelling my wedding and planning the new, much smaller wedding. I was honestly feeling so low and like I had no control over life, and because we were all still stuck indoors I felt a bit isolated as well. And somehow that turned into I’ve Had a Rosé, Let’s Talk About Feelings. My friends have pointed out that instead of getting therapy like I should have, I made a podcast. But you can’t put therapy sessions on TikTok. So there.

There’s one series of I’ve Had a Rosé, Let’s Talk About Feelings out now, and hopefully I’ll get to make another in the not too distant future.

You host an annual musical comedy version of the Eurovision Song Contest with Piñata. How did that come about?

Well it’s well established I am an eternal Eurovision fanatic. It’s my FIFA. It’s my World Cup. It’s my [3rd stereotypical straight thing that is ultimately pointless]. So when they cancelled Eurovision back in 2020, Piñata kindly asked me to host their alternative contest with musical comedians, all livestreamed from our houses. It was bonkers but brilliant and now we do it every year. We just did it live & in-person for the first time actually! Utter chaos but I love it. Anything that allows me to live my full Graham Norton fantasy has to be a fun time. 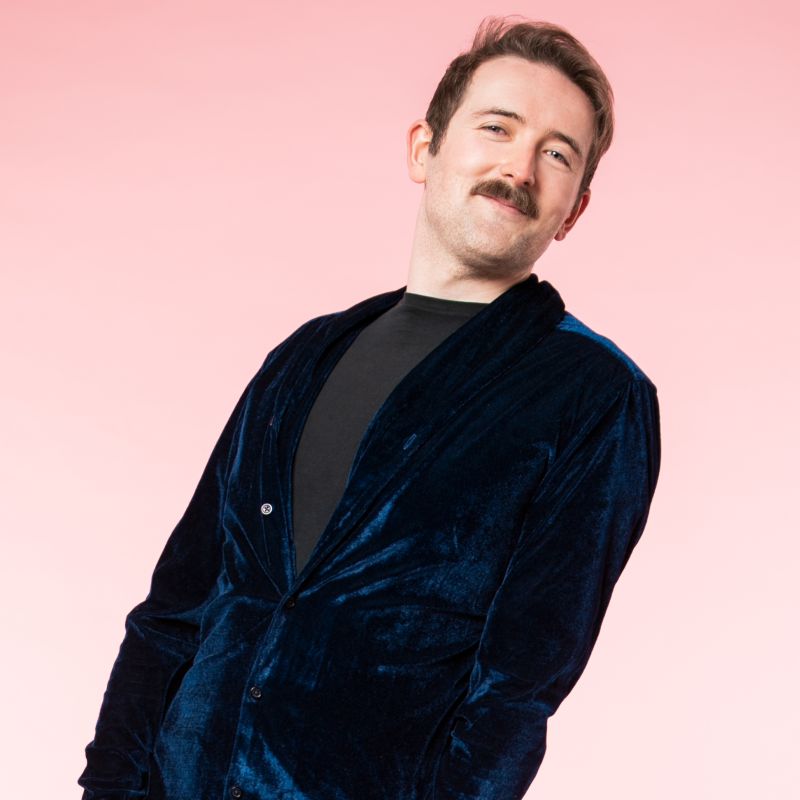