According to his website, Craig Hill’s first passion was hairdressing. As much as he loved the patter and the reward of perming an otherwise dull, flat bob, he went on to explore his real passion – performing!

“I love touring abroad. Scots ex-pats are more passionately Scottish than Scots are. And I’m always delighted that my shows have an international appeal.”

Do you get more Scottish as you leave home?

“No. If anything I tend to adopt the accent of wherever I’m visiting. I can do a good Australian.”

Do you know all the words to The Flower of Scotland?

“I don’t know all the words with most songs. I’m very good with tunes and melodies. People think that I would love Karaoke, but no. I was at a wedding recently and someone mentioned that they had heard me signing Footloose at a Karaoke night. The band at the wedding overheard this and were urging me to sing it one stage. But I only know the words when they are up there on a screen.

“You might think you know a song. Typically everybody knows the chorus and people rarely know the verses.”

I remember you talking about that on stage ages ago. It was at the old Assembly Rooms. The show was Craig Hill’s Got the Ballroom I think.

“Ha yes, one of my cheeky wee titles. I think if my show title didn’t have a double entendre people would be disappointed.

“It’s very British to use double entendre. It’s a way of dealing with sex without it being too sexual.

“When you’re on stage you are walking such a fine line. As long as you don’t cross it you’re OK. I usually look for the nice elderly lady in the audience. If she’s laughing her head off then I know I know I haven’t gone too far.

“This year’s show is called Craig Hill: Give Him an Inch…”

Are you popular with nice old ladies?

“I am, but I seem to get more saucy ladies in their forties. Actually they’ve started bringing their husbands so I get quite a few men along now too. My act is predominantly Scottish than it is camp. So it reflects their culture more than they expect.”

I’ve noticed that you get lot more locals at your Edinburgh shows than most Fringe shows do.

“My act does seem to be very popular here in Scotland, so it’s nice tour round the world and challenge myself as a comedian with different audiences with different cultural experiences and references. Keeps me fresh. I love the fact that my act seems to be just as big in Australia as it is here.

“I did Just For Laughs in Montreal and it went well. I thought if my act works there then I can be spontaneous with any audience.”

Your act is much more of a conversation with the audience than most stand up shows.

“Yes it is. It’s audience directed. Of course like any good comedian, I try and weave in scripted stories into the show as if they’ve just occurred to me. Like I’m telling them for the first time. So I have a show up my sleeve. It doesn’t matter what order it all comes out in, or even if it all gets said.

“I write a blog of every single show, and they are all different because of this approach.

“I try and make every performance an event.

“I love to fly by the seat of my pants.”

Audience interaction isn’t for everybody is it?

“People sitting at the front are usually up for it. I back off if they look uncomfortable, I can almost always tell who’s up for it and who’s got a story to tell.”

“I’m from Glasgow. I was born in Pollock and then grew up in East Kilbride. I went to Drama College in Edinburgh and ended up staying here.

“When I was at Drama College I would do summer jobs and I used work at the Gilded Balloon on the box office. A lot of the people I met at that time are still friends now. The Press Officer, Sinéad, came up to me one day and said, ‘I’ve booked a gig for you.’ I told her that I wasn’t a comedian but she said, ‘I think you are.’

“So I played this student night one Tuesday in February, 1998. Looking back it should have been a tough gig, but my memory of it is that it went well. The moment I got that one laugh, I relaxed and never looked back.”

And your first Edinburgh Fringe was in 1999?

“And I’ve performed at every Edinburgh Festival since.”

“I did not come up with that title.

“I did have a wee goatee beard at the time. It looked ridiculous. So it was me and two straight comedians sharing the bill and they both had beards too.

“I wanted to call it heterosexual sandwich.”

Beard aside, how has your act changed over fifteen years?

“My shows used to be very musical. I started telling more stories and they also started getting more Scottish. After several years, and it did take years to do this, I plucked up the courage to go ‘off the cuff’.

“I was in Oban one year and they asked me to put in an interval. I had prepared to do about one hour fifteen without an interval. They said, ‘Oh we need an interval, its Oban.’

“So I decided to, for the very first time, improvise in the first half. At that point it was the best gig I’d ever done.

“Now days my shows are a bit of a hybrid. Lots of banter peppered with material and a touch of music.”

Who would appear on the Craig Hill Comedy Roadshow on TV?

“I’d have Jason Byrne for high energy. Ross Noble for his playfulness with the audience. Daniel Kitson for his use of language, it’s beautiful. Kitson is just wonderful to watch live. I’d have a newbie, Nick Cody from Australia. And for music, I’d have to have Tina C.”

Tina C had the Loud and Proud Choir perform as part of her Edinburgh shows one year. You’re their patron aren’t you?

“I always say, the Patron Saint.

“They are a great outfit. An LGBT friendly choir based here in Edinburgh. I do what I can to help promote them. 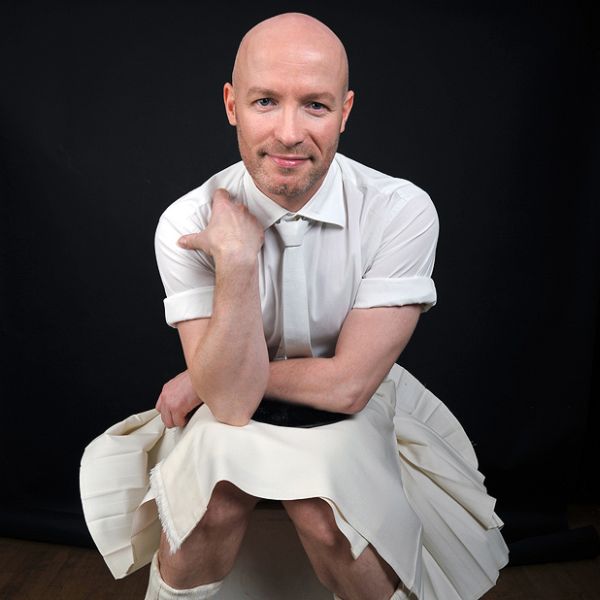