Susan Calman is a regular on radio and television. It’s surely only a matter of time before she heads her own primetime comedy show. Martin Walker asks about her latest Edinburgh offering, Lady Like!

“It’s difficult to describe what the show is about without giving the point of it away. I don’t mean it’s a whodunit or anything. Nobody gets murdered. Suffice to say that it follows my tradition of writing shows about matters that are quite personal to me. I can, however, reveal the following facts about the show

You’ve been on numerous TV and radio shows and toured live all over the place. Tell us your best and worst experiences.

“Best experiences are too numerous to detail but suffice to say almost everything that I’ve done on Radio 4 has been amazing fun. Also being on HIGNFY and QI was pretty mind blowing.

“The other main highlight was a sitcom I had a small acting part in called Dead Boss. I don’t think I’ve ever had more fun in my life. I also got to meet some of the comics I’d admired for years including the magnificent Jennifer Saunders -who was just a delight to work with. The first time I met her I played it so cool, if cool is defined as “not being able to speak and pouring tea over yourself”.

“Worst experiences are usually gigs I’ve agreed to but then regret accepting. As a comedian you generally know when you accept a gig if you shouldn’t have. You get a gut feeling. Mostly my gut feeling is right. For example the gig in the bingo hall wasn’t great. It was bloody awful. See also gigs for children, corporate gigs and a gig on a Subway. However bad they are the fact is that these are the gigs that, one day, will make you great. If a show makes you feel like your insides are being scraped out by a grapefruit spoon, if your legs turn to liquid and your mouth to sandpaper, and you still carry on gigging, then you’ll be a comedian one day my son. Terrible gigs become brilliant stories and invaluable lessons. The main one I’ve learned is always listen to your gut. And say no if you’re opening for a Robbie Williams Tribute Act. That was not a fun evening.”

“Right then, let’s have a think about the panel show issue for a moment. Firstly, I think the comment was well intended and sought to redress what is sometimes a glaringly obvious issue on television. However, as a generality I don’t think that I should be given better opportunities because I’m a woman. I don’t think I should be given an easier time of things because of my sex. I don’t, fundamentally, believe in a quota system because of the perception that an audience may then have towards any woman who appears on a panel show. I do think that some shows need to widen their address book somewhat and perhaps consider taking more of a chance on women (in the same way they do with fellas) but that’s simply because I know there are so many funny women who could be on them. Fundamentally the statement has kind of become more of the story than the issue of diversity in comedy. Maybe a better way to address the issue of the lack of female guests would have been to speak to producers and bookers on a more private level rather than making a public pronouncement about it.

“Of course if it does make a huge difference to booking policies and more female comics break through then brilliant. I think we need to wait and see what the effect is. Personally, I’m still very much of the opinion that if any of the Channels had a panel show hosted by a woman it would make a huge difference to the perception of how women “cope” on panel shows. So that’s what I’d like to see more than anything.

“The axing of BBC 3 is an interesting one. I certainly watched a lot of the comedy that was broadcast on it. What I do know is that the channel developed a lot of new talent (whether it made it to screen or not) and getting a project on the slate with them often gave writers their first chance to meet important people at the channel and see how other projects work. I know that on line is an excellent way of showing programmes and, in ten years time when we all have magnificent broadband coverage, it will be great. My fundamental concern, and I’m happy to be proven wrong, is that budgets for development will be slashed and comics and writers will be asked to work for nothing to create on line projects as a feeder to possible TV work.

“Hopefully in five years’ time BBC is working brilliantly as a feeder channel to BBC1/2, creating opportunities for a diverse range of comics.”

“I’d suggested a few projects to Radio 4 for a series prior to the commission of Susan Calman is Convicted, none of which were good enough (something I can now happily say in hindsight!). Then in 2012 I wrote and performed an Edinburgh Show called “This Lady’s Not For Turning Either” which was about equal marriage. Two Radio 4 producers called Alison Vernon Smith and Lyndsay Fenner came to see the show and suggested it might form the basis of a series. Caroline Raphael (Commissioning Editor Comedy & Fiction BBC Radio 4) also came to see the show and we worked up a quick idea for four episodes. It was commissioned in the September, I wrote three more episodes in the November and we recorded it in the January. It was incredibly quick (as there happened to be a free timeslot) and the first series went out at 11pm.

“Comedians often complain about interference from producers but I can honestly say that the writing process was without any such issue. And that’s why I’m spoiled for anything else to be honest. I simply came up with some ideas and I wrote them. The same process applied for Series two. Lyndsay and Alison give me notes but they were generally always about structure never about content. Having such freedom is rare but exciting and having producers who encouraged my creativity was a joy. Radio 4 has completely changed the direction of my comedy career and I’m forever grateful for that.

“When I kept the News Quiz chair warm recently it’s no exaggeration to say that it was a dream come true. I love the News Quiz with a passion and to be allowed to sit in the driving seat was amazing. Sandi is, of course, a legend and she has exquisite timing and delivery on the show. I loved doing it but I love Sandi doing it ever more. She is the News Quiz.”

BREAK FOR HALF TIME ORANGES

I await your call Mr/Ms/Miss/Mrs Commissioner. 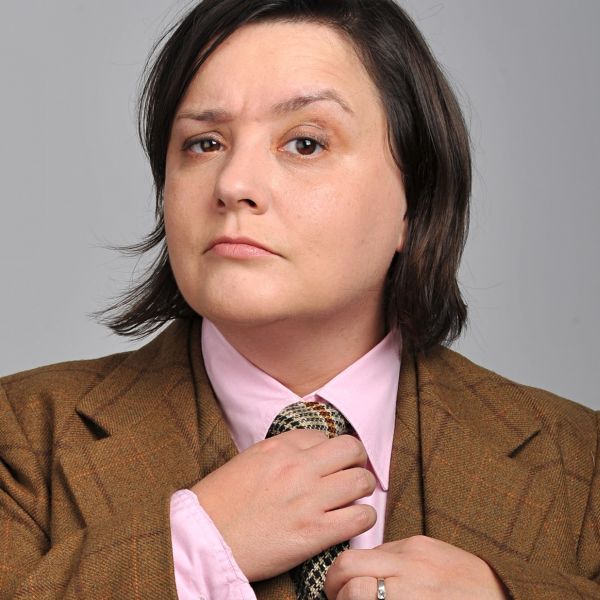