Milo McCabe is a character comedian. He returns to the Edinburgh Fringe for the sixth time in 2014 with a new show based around a single character called, Troy Hawke. Martin Walker asks, “Why Troy?”

“It’s my favourite character from last’s year’s show Schiz, Troy Hawke. He’s a Ronald Colman / David Niven type, homeschooled in an old fashioned environment and let loose into today’s society without a clue how anything works. Basically, he’s devastated to learn that as a white middle class male, he is without the ‘struggle’ in society that he feels he needs to develop a heroic character.

“I just love performing as this guy. He’s an over the top theatrical type with boundless self-esteem but absolutely no basis for it whatsoever. As a character he doesn’t need much exposition as people have seemed to get on board with it very quickly.”

What’s the difference between Character Comics and other Stand-Ups.

“It’s interesting, because there is a school of thought that states that in playing exaggerated versions of themselves, all stand-ups are essentially ‘characters’ in a sense. I think there are advantages and disadvantages to literally playing a character though. In a way, it can be easier to ‘hide’ onstage behind a character and get a little more leeway from a crowd, but at the same time if the audience don’t buy in, everything can go south a lot quicker.”

Your fringe debut was in 2009. What keeps bringing you back to Edinburgh?

“Ego, career opportunities and fun. I’ve also come to really enjoy the honing process of creating a new hour of comedy every year. But mostly the first three.”

Have you ever offended an audience member who didn’t get that you were in character?

“Christ yeah. I’ve offended people that did get that I was in character. In this show, as Troy, I touch on issues of sex, race and class. The only people who’ve been offended thus far though have been some white middle class people from Surrey and they LOVE being offended anyway. Gives them something to talk about – I’m a white middle class guy from Surrey, so am allowed to say that…”

If you were curating a stand-up/music show for television, who would be your guests?

“Mark Silcox – newish act coming up to Edinburgh this year who is one of my faves, a group called ‘G.O.A.T and Your Mom’ – YouTube it! and Mark Restuccia’s new band ‘Hairy Maggot’. They’re a pretty new outfit; they mostly sample overfriendly customer service phone conversations over a kind of trance beat. It’s hilarious.” 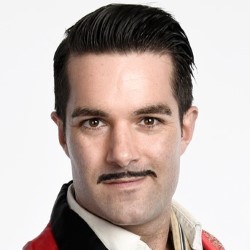