“It’s of my funniest stuff. The show is slightly held together by me exploring the fact that I want children, but that idea of the responsibility that goes with kids terrifies me. It’s also about my gran.

“My grandmother is ninety four. Sadly she has never seen me do stand-up. She’s in a nursing home now. She doesn’t get out much, but she is still an indomitable lady. Her place in my show is sort of a counter point to my own turpitude, my own concerns about having a kid. She’s an incredibly powerful, self-reliant, self-sufficient, woman. I say in the show that I’ve only seen her cry once. I saw a single tear roll down her check and she said, ‘I mustn’t cry.’ I swear to you the tear rolled right back up her cheek again.”

So what is holding you back from having children?

“Cold fear. My anxiety is that I pass all my failing on to my kids. I want to get to the stage where I’m settled enough, but as everyone says, ‘you’re never ready.’ But that’s not a very helpful thing for people to say. I’m not ready but should have a kid? Or not ready and shouldn’t? Fuck knows which one I am.”

How does your partner feel about this?

“My girlfriend features in the show a lot, she’s a little bit younger than me, but she’s a strong woman. There’s a lot in there about our relationship. I also talk in the show about the war between couples and single people. Everyone is trying to build their own ranks and then steel people across from the opposite side…”

But how does she feel about you revealing details of your relationship on stage? I must admit that I wouldn’t chose a comedian as a partner.

“God no, I wouldn’t either! Are you insane? All your business on stage? That’s hideous. But she responds to it very, very, well. She has a proper job, and she does impressions of inanimate objects. I do a few in the show. Her impression of food in the fridge always kills.”

Can I ask about your TV work?

“Well, we both know that the thing on TV I’m most well-known for is Show Me the Funny? And who wants to talk about that?

I do. I thought you came over very well on that show, given the restrictions so of the format.

“Thank you. It was very effective in introducing me to people who watched Show Me the Funny, whom, as we know, were mostly people who work in the comedy industry.

“For a short while I was famous. It was nice to get the odd person come up to me at festivals and tell me that I was robbed and stuff. But ultimately most of the people who took any notice of the show were mid-level comedy bookers.

“I did find the whole process extraordinarily problematic.

“Round about episode four I nearly walked off the show. I was having such a horrible time and finding it really stressful. My bother said to me, ‘you can’t walk off the show.’ I said, ‘I bloody can.’ And he said, ‘you can’t because if you do, they’ll film you from behind and play Coldplay over it.’

“The best thing that came out of it, other than introducing me to people maybe a couple of years before I would meet them anyway, was my Podcast Comedian’s Comedian with Stuart Goldsmith.

“While I was being interviewed about comedy, I realised how much I enjoy talking about comedy. But I was hugely frustrating not to talk about comedy in any real depth. There were two or three different scenes that made me go, ‘there’s a conversation to be had here, that no one is really having.

“It wet my appetite for talking about comedy properly – being genuinely analytical and open about the craft.”

You’ve talk to some of the most interesting and successful comedians on your Podcast.

“I have. It’ run for almost ninety episodes now. For a while it was bi-weekly, but its weekly now. It’s very much Inside the Actor’s Studio by for comics, sometimes broadcast live.

“I’ll be doing some in Edinburgh.

“Greg Proops was an incredible guest. He gave me the quote, ‘not just another wanker talking about comedy.’ Which was great. Exactly what I’m going for. As a comedian and as someone who is in touch with his own anxieties about the creative process, I can really get close to people and get them to open up about, for example, what it actually feels like to be staring at a blank page. Or what it really feels like to receive criticism and even how people would review themselves. I’ve been really enjoying it.

“One of my favourite moments was when talking to Tony Law. He’s tremendous, I really recommend the episode. We really got underneath what his comedy is.

“Susan Calman was another good one. I asked her about the part of her show a couple of years ago were she cried at the end. Was it part of the show or a theatrical thing?

“Had a good chat with Brendon Burns too, I had to put it to him that, ‘that’s the sort of answer a fourteen year old would give, if he were trying to show off to his friends.’”

“I’ve been doing comedy for ten years now. People respond to me because I’m in the club. I’m on the inside.”

You’re clearly analytical with your approach to comedy.

“I am very analytical, but for me, my journey as a comedian has been about trying to take the obstacles out of the way. I am full of obstacles and analysis and that can create a barrier.

“This year’s show is the best I’ve ever done because I’m getting better and better at being natural. Slightly less of an intellectual approach to it.

“Something I do quite often is Comedy For Kids. And I leave those gigs energised. Part of the reason for that good feeling is that I’m not trying to prove anything. So I have a silly idea, I write around it, walk on stage and play with it some more. It can feel really free. It’s the first time I’ve felt that level of freedom writing a show for adults.

“So this year I’m really looking forward to Edinburgh.”

Who would appear on The Stuart Goldsmith Comedy Vehicle?

“Harry Hill. I saw his work in progress show, which he did in front of just two hundred people at Edinburgh last year – brilliant. Even though his jokes are daft. The intelligence behind them is immense.

“Can we bring Mitch Hedburgh back to life? The thing about his material is that his one liners don’t really work written down. The joke itself only works if he is in the equation. It’s like the machine only works if he builds it.

“Simon Munnery is my single biggest influence. I see him two or three times a year. I’m a massive, massive fan.” 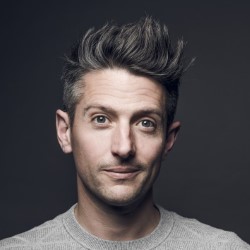