When should you give up on a dream? This Edinburgh Festival Fringe you can go behind the curtain with BBC Radio 4‘s Viv Groskop, in I Laughed, I Cried. Martin Walker finds out more about this unique stand-up comedy experiment, and also about Viv’s celebrity chat show with a difference, The Night I Died.

“I Laughed, I Cried is a show about trying to do one hundred gigs in one hundred consecutive nights in an ill-conceived attempt to ‘crack’ the basics of stand-up. And it’s about what happens when you try to make a radical change in your life. Especially when you have a husband and three children and they do not want you to do one hundred gigs in one hundred nights. It’s chaotic and confessional and a lot of fun. There is more than a hint of mid-life crisis. – I took up comedy in my late thirties. It’s part-improvised, part-interactive. The audience chooses which of the hundred gigs they hear so every time it’s different. I did it for two nights at last year’s Fringe as an experiment and a Broadway Baby reviewer sneaked in and gave it five stars. This encouraged me, probably wrongly. There’s also a book of it described by Jennifer Saunders as ‘absolutely hilarious’ and by the Mail on Sunday as ‘frankly psychotic.’”

“The Night I Died is a seat-of-the-pants, improvised chat show all about the joy and hell – but mostly the hell of performing for the Great British public. Stand-ups tell their worst stories of death-by-a-thousand-heckles. Writers recount the killer one-star Amazon reviews that keep them awake at night. We are all happier and more balanced as a result of them sharing their misery. This show is up-close-and-personal and honest and packed with you-had-to-be-there moments.

“I had my Edinburgh debut with Heroes last year when Jo Caulfield, David Morgan, David Mills, Norman Lovett and a host of others – including Bob Slayer himself – graced my disabled toilet, sorry, performance space.

“This year I’m fresh from a sell-out show to a crowd of 400 at Borders Book Festival where Kirsty Wark talked about people sending her cream for her warts and John Sessions talked about upstaging Marlon Brando. So we’re going bigger and better. Not that you have to go much bigger or much better to improve on the equivalent of a disabled toilet.”

“The Night I Died is about intimacy and authenticity. It’s stand-ups and performers talking in the way they talk amongst themselves after a bad gig. There’s no pre-prepared material, no set pieces. A lot of it is funny. But it’s more important that it’s real.

“It is a calling. The call – caw? – has come from a very shrill-voiced evil crow who is making me do this even though I am not twenty three and wearing drainpipe jeans and having Mr Whippy hair.”

“I do not go too far. I am more UN peacekeeper. I once broke up a fight – from the stage – between a tattooed eighteen-year-old and a toothless eighty-year -old who were brawling at the back of the room. They responded as if I were their long-lost governess. This was the correct response. I have not been in a hurry to return to Croydon.”

“All the guests I get in Edinburgh. This is a great stand-up show for television and the guests are fabulous! Wake up, commissioners! Come and join me in the upgraded deluxe disabled toilet!” 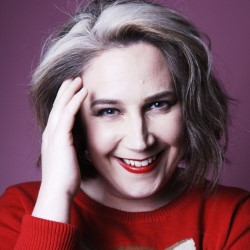