Popular showman Chris Cox is performing at the Udderbelly on the South Bank in London this weekend, with his fifth hit show, Fatal Distraction. Martin Walker pulled him aside for some brief one on one Cox action (that’s enough of that – Ed).

Tell us about ‘Fatal Distraction’.

“It’s me reading minds. But I can’t actually read minds. Imagine incredible magic, a beautiful theatrical love story, incredible reviews, some laughs and some puns based on my surname and you have Fatal Distraction.”

Hang on, so you don’t claim to actually read minds?

“Nope. I’m a mind reader who can’t read minds. I use loads of techniques to make people think I know what they are thinking. My skill is in making you think I can read your mind. Not actually reading your mind. But people who see the show swear blindly that the only way I can do what they see is to actually read minds.”

Is it true that the power of audience control once had you riding around on Jonathan Ross’ shoulders?

“You betcha. There’s a trick in the show where people are asked to think of things they want to see me do. Jonathan was in the audience and was thinking of me sat on his shoulders like a giant baby. I read his mind and do exactly that. What a weird fetish he has.”

How do you feel about the BBC decision to close BBC3, home to your show, ‘Killer Magic’?

“I’m really saddened by it. Not least as it’s the outlet for Killer Magic. It’s a hugely important arm of the BBC which delivers to a massively underserved audience and the future of the BBC. I can see their idea of having it as a digital station has legs but it won’t be able to deliver the same output with the smaller budget so I really hope they change their mind and keep it running. It’s the only outlet for new and young talent to be developed and nurtured on the BBC and is vital for a young audience.”

If you were curating a stand up/magic show for television, who would be your guests? 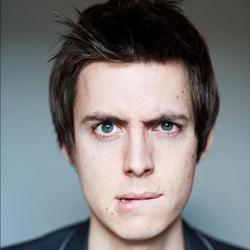