A full time comic of six years, Dave Chawner is regular MC, opener and warm up act. Now he is preparing a set with Robyn Perkins for the Edinburgh Festival Fringe. Martin Walker finds out more about what promises to be a deeply personal show.

“The name of the show is Over It – Death, Anorexia & Other Funny Things. It’s a two-hander with the wonderful and talented Robyn Perkins. We are trying to use comedy to get people talking about more taboo topics – namely death and anorexia.

“For me it’s all about my anorexia past. When I was suffering one of the worst things was that it felt like no one was talking about eating disorders. I am trying to use my experience to help remove the stigma surrounding anorexia and get people talking about it more openly. But it is comedy not therapy.”

“Me and Robyn are really passionate about the topics we discuss. We don’t want to exclude anyone from seeing the show. Making the show free means that everyone can come and see it. So The Free Fringe is the perfect solution.

“In addition, I have done many other festivals with Laughing Horse and the venues are amazing, the team are incredible and the whole experience is fun.”

“I went to a local comedy club and became hooked. Every Tuesday I would round up an ever-increasing gaggle of people and it became the highlight of my week. After six months of that, I decided to give it a go myself – I’d got no dignity to lose anyway.

“My first gig was a real buzz – I was still reeling I hadn’t been pelted with rotten fruit and beer bottles, and was reluctant to admit it had actually gone OK. When the bar manager asked me if I could come back the next week – I couldn’t believe my luck.

“That was six and a half years ago now and I have never once looked back.”

“Just one!? One of my favourites was when I arrived at a pub in the arse-end of Romford with no lights, no mic and no stage. The promoter found an old karaoke machine he put next to the toilets and told me to ‘go for it’. When I got assaulted and bundled into the back of his car I remember thinking, ‘this is the hardest £100 I have ever earned!’”

“If I was curating a show it would be a mixture between Room 101, Friday Night With Jonathan Ross and Comedy Central At The Comedy Store.

“I would interview Eddie Izzard, Ricky Gervais and Victoria Wood. There would be house music by The Horne Selection and I would have guest spots from Terry Alderton, David O’Doherty and Greg Davis. Each show would end with a pop quiz and a challenge for the next week.” 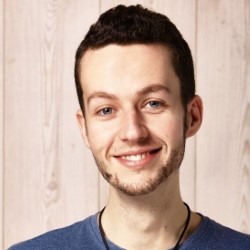