The show, First Edition contains observations that irritate Urzila Carlson. Urzila talks about the pressures we’re under in modern day society and like stuff we would normally not even consider, like drinking craft beer and listening to an indie banjo alternative band whilst wearing dungarees.

My show is observations and stuff that irritate the shit out of me. We are under so much pressure to fit in and confirm or people won’t “like” is, not just not like you in person but god forbid they could snub you on social media. We’re surrounded by people with allergies and specific food requirements and weird political views…. I discuss that.

It’s the one estivate everyone talks about and wants to know about. “Hoe do you go in Edinburgh?” it’s the measure of the comic and I am looking forward to the challenge. It’s huge and I’m excited.

I get more inspired by situations than people. I love being in a creative environment like the Fringe and surrounded by amazing talent that’s all around. It inspires me to write more and it makes me want to be a better comic.

BEST: My first Melbourne Town Hall sell out show. I couldn’t believe it and I had a adrenalin buzz going for days after.

WORST: Early in my career at a corporate a lady stood up 10 minutes into my 1 hour show, she said; excuse me, could you leave?! Other audience members yelled at her and she left. I said nothing, I had to continue and the remaining time was filled with a tense silence where they were listening to me out of pity and nobody wanted to start up a confrontation so they all kept really quiet.

I’d still be working in advertising, the hours we’re shit but the people were great.

Bonkers: My life in Laughs by Jennifer Saunders

If you could redo one thing in your life what would that be?

I would go back to the day where I was offered an upgrade on a long haul flight but didn’t understand what the air hostess was asking me “do you want to move up front?” Me – “no I’m ok”. Who does that?

It would be a comedy about how I got separated at birth from my 2 sisters (triplets) were given up for adoption and we were all raised in different countries with different values, our older biological sister that they kept tracked us down and exposed what happened, we couldn’t believe it till DNA testing proved she was right. Starring as my 2 sisters from the womb; Melissa McCarthy and Queen Latifa and our older sister is Dawn French. 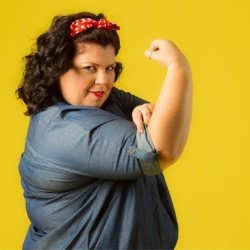