For a good old comedy knees-up, brother and sister duo Becky and James Bone, have Got It Covered. Martin Walker talks to James about how they got started in performing and promoting comedy.

“Well as any acts who also moonlight as promoters may agree, we just wanted to get something going that allowed us to put on the people who really make us cackle and leave us somewhat inspired, and it gives us the chance to try our own ideas out a little more freely which is handy. It’s run by us a simple brother and sister pair although we host it as our alter egos, East London bouncers who are also brothers. We’re not sure what this says about our real life upbringing, but Becky looks fantastic with a beard and that’s all that matters. So far we’ve had the likes of Tony Law, Patrick Monahan and David Mills headline and joined by a whole host of other future stars though for word count purposes we can’t name them all, but rest assured we think they’re fantabulous. It’s a monthly night at The Lion in Stoke Newington, North London, but the World Cup means the venue is taking a breather from events in June and July!”

And you’re bringing it to Edinburgh?

“The Edinburgh Got It Covered Comedy Hour is basically our monthly night in London, but shortened to 60 minutes for the purpose of Edinburgh so probably three great acts a night rather than six. It’s in that world famous comedy establishment otherwise known as the basement of Chiquito’s restaurant on Frederick Street! It’s our first year proper doing our own thing up there so we are planning on having the best time possible without taking things too seriously… of course if you see us crying into a puddle of our own tears come the August Bank Holiday then you’ll know we have failed in this plan. Join us at 9.55pm every night and entry is free of charge! Bucket donations very welcome.”

You and Becky host in character.

“Our beloved characters are Den and Ray Jenkins, brothers from the school of hard knocks aka Stepney Green in East London. They also run their own security firm known as Got It Covered, although these days they are rapidly rising through the showbiz ranks via a mixture of motivational speaking and public book readings of their upcoming autobiography Got It Covered: An East End Fairytale. Ghost written by Martina Cole.

“In real life the both of us perform stand up separately and will be racking up the spots in Edinburgh no doubt. Becky and her improv group All Made Up are doing a show on the Free Fringe as well, so she’ll be a busy bee!”

How did you get into stand-up comedy?

“Funnily enough it turned out the idea of doing it had been floating around our individual heads for a while without the other realising it. The two of us have always been involved in various creative endeavours so it wasn’t a completely off the wall thing to attempt. But then whilst we are brother and sister who both do this comedy thing as pretend brothers, luckily we still find time to live separate lives from each other also. So when the time comes to put on our GIC tops and combat trousers we are more than ready to act like fools.”

“Richard Dawkins and The Pope on one team, John Lydon and The Queen on the other. Four worlds colliding and Den and Ray could act as security. Maybe not as edgy as QI, but we guarantee it would at least get on to BBC3.” 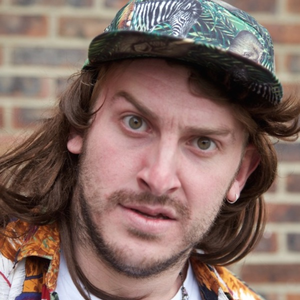