A Brighton based comedian, Liz Peters is the winner of London’s original variety show, Cheese ‘n’ Crackers and semi-finalist in last year’s Funny Women Awards. As Martin Walker discovers, she is appearing at both the Brighton and Edinburgh Fringe this year with her latest show, Toybox.

“Toybox is a feast of adult silliness full of murderous yarns and joyful vulgarity. It’s a high energy musical comedy show and I lark around in ridiculous guises, playing games and talking about thinks that make me happy. Unlike the name might suggest it’s definitely not for kids – unless you want them to learn some ‘behind the bike shed’ business. Playtime for grown-ups!”

Are you a musician, singer, writer, actor or comedian first?

“I’d say I’m an actor, improviser and comedian. For me the musical side of things is just the way I like to create my comedy – playing with lyrics, rhythm and melody makes me laugh – but any dreams of being an actual pop star died years ago – well… there’s still smouldering embers somewhere! Writing is something I do to enable me to perform material that I like, but ultimately I’m happiest being up there and doing it rather than thinking about it.”

How did you get into performing?

“It was always something I wanted to do so I did music and dance classes from age dot and joined a youth theatre as soon as I could. But it wasn’t until I twigged how much I enjoyed doing comedy that I really found my groove. I recall doing a Chekhov play years ago and the other actors were finding great insights and being earnest but inside I was screaming ‘Balls. I just wanna mess about!’ Discovering improv was like a lightbulb going on and gave me the confidence to strike out with my own comedy stuff.”

And you used to write and perform in NewsRevue?

“I have never been so up on current affairs as when I did NewsRevue. I reckon I could have stood for parliament I had my finger so firmly on the pulse! It became a good drill to open the paper, read a really terrible story and think ‘what’s the funny here?’ I had a great cast and I really enjoyed the pressure of having to come up with new material, tweak it and perform it that night. It’s nice to work intensively on one thing and have that take up all your waking brain. It was a wonderful, exhausting experience. Kind of tortuous but deliciously so.”

I think I’d have a nice giggle with Luisa Omielan, Abandoman and French and Saunders. I’d also let Louis Theroux join in ‘cos he’s adorable and will have some tales to tell. We’d eat him up but I don’t think he’d mind. And I’d wheel Johnny Depp out so we could look at him. And smell him. 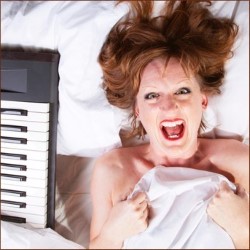