The show is the latest of our copious forays into performing narrative sketch comedy set in the various universes of our favourite film genres. This show, ‘Tales From The Elsewhere’, set in the early ‘80s, resides in non-descript MidWest America, the small town of Hopeville, a community of white picket fences and backs slapped slightly too hard by dubious farmhands. There’s obviously a deadly secret to be found in the heart of the town’s openly suspicious Abandoned Laboratory, and when three young whippersnappers stumble across a set of cassette tapes, horrors begin to unfold. It’s sort of Stranger Things and the Goonies by way of League of Gentlemen and Vic & Bob. That sort of show, yeah. Oh and there’s just two of us playing more than 50 characters between us. Should have mentioned that earlier. And it’s got a live synth score.

We formed as a crudely named double act (the name comes from the fusion of our two surnames, Lovick and Harding) at the University of Birmingham in 2013, where we entered a sketch competition the comedy society was running. We entered with the cretinously-named show title ‘A Good Day to LoveHard’, with a courtroom drama about the Chuckle Brothers. It was all right. We won the sketch competition, being welcomed up by the compere with the phrase “but everyone’s winners really”. Being student sketch comedy, most of us, needless to say, were not winners. The following year they did away with the competition. Meaning that we’re still the reigning champions. I think I still have the honorary silken scarf somewhere.

This is genuinely not made up. Jacob does twelve squats. Tyler panics that everyone will hate it. Then we both have a fake fight that involves mime-trashing the backstage space. And we go to mime town on that place. Good GOD, there isn’t a fake wall left standing at the end of it. We genuinely do this. Oh and we hug.

The best review was one that said that we were “one of the most entertaining shows that they have ever seen… and it was impossible not to enjoy it”, then gave us 4 stars. Never was the phrase “but it reads like a five” used more on the Mile than that year. We’ve been lucky thus far to escape genuinely terrible reviews, apart from one tweet that told an accapella group to ditch us as their warm-up act. Why we were warming up a group of accapella fans as a comedy double act that can neither sing nor play instruments is beyond you and me, but apparently not beyond the audience. My favourite part of the night was the sound of the audience’s cheers turning to wanton dismay in, essentially, an instant as they realised that we, not the group, were the ones entering the stage when the room went dark and the lights started swirling.

We always say we won’t, but we bloody flipping always do. Under the covers at midnight usually.

As stated before, we’re pretty favourable towards them, as they’ve been reasonably nice to us. We were criticised in 2016 for performing Scottish characters onstage in Edinburgh by a Scottish reviewer who described our accents as “ranging accidentally into parts of the world far, far away from Caledonia”, which was simultaneously unfair and completely reasonable. If the reviewers can find something constructive even in the direst of circumstances, they should be praised. Certain reviewers seem to go out of their way to do the opposite. Just for god’s sake don’t start with the phrase “if comedy is what you are looking for, then you could do worse than see [insert act name here] at [insert droll description of venue name here]”.

It seems like a fantastically, fundamentally brilliant approach to putting off writing your new show, and also appears to have worked rather well for getting his name out there. It’s not criminal though. It’s flipping idiotic, but not criminal. The only offence committed here is calling yourself Count Dankula.

The obvious ones, really, as have probably been discussed extensively by 20-30 straight white men on THAT particular Facebook group: rape, wife-beating, anything in the way of ‘punching down’. The backlash against political correctness is peculiar – most comedians would probably pitch themselves as being on the left, i.e. progressivism, but also seem offended by the notion of millenials being offended. Why? We’re the ones that will be alive in the future. Probably not you. So move on.

I hope not. Genuinely. I mean we’ve joked about dead children and repressed 1930s homosexuality onstage in previous shows, but we’ve tried to couch them within a context in which they work as plot points, rather than shoehorned bits of gratuity. I think that’s the rule, right?

What was incredibly satisfying last year was that, somehow, despite being ‘the wrong side of the bridge’ (i.e. New Town), having absolutely no advertising budget, no agent, no promoters and being a free show in the unsuitably-shaped basement of an upmarket bar, we had more than 200 people turn up to try to cram themselves into a 70-seater venue every single day for the last two weeks of the run. It certainly felt like the clearest example we’d both been given as to justify why we wanted to do comedy, and do it on the Free Fringe: so that it didn’t feel like a vanity project for rich kids to do something with their time because they once made six mates laugh in a pub, and it didn’t feel like it was sown up by people who had the money to buy themselves an audience – it felt like two incredibly sweaty people being in a tiny room with no props or costumes and just doing something that felt fucking punk. There’s an answer for you. 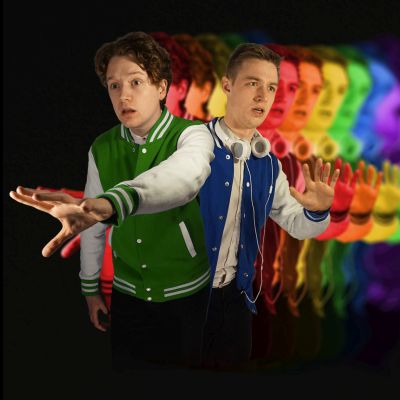