“It’s called Sean Brightman: Almost Sean Brightman and it’s my very first Edinburgh Fringe solo show. You could call it a postmodern new alternative adventure in what a comedian looks like in a bleak dystopian near future. A bit like The Fly with Jeff Goldblum, except Jimmy Tarbuck gets stuck in ‘the machine’ with Johnny Vegas, Harry Hill and Terry Alderton. But you would be wrong. It’s just me being quite silly, playing games, sound effects and with some wigs, beard hair and a puppet.”

Why did you choose to perform as part of La Favorita Freestival?

“I didn’t have much of a choice, I’m one of the core team who have been working all hours to give life to this wonderful section of the festival. I’m actually looking forward to performing in a minimum of two shows a day in August as a bit of a holiday. And I just need to let you know that just because we have a name sponsor it doesn’t make any difference at all to the artistic integrity of this or any show that we are delicious pizza delivering.”

“Definitely not a career choice. An affliction? I’ve already had one of those for many years – a career choice that is, in graphic design, and comedy is a way to focus on creativity without having to worry about pleasing clients. It’s quite an interesting point, as up until last year I was in that zone as a comedian, trying to be liked and please people. Then last year I did a character based show with my wife called Phillip and Marjorie’s Marriage Preparation Course for Regular People and The Gays and had an epiphany. Make what you want as you want it, not to please other people. And a lot of people got what we were doing.”

In comedy, or life? I’m still going there… Ask me next year. I’ve climbed over audiences to hug people in the 2nd and 3rd row and spilt their drinks. I’ve mistaken a woman in the audience for a man. And vice-versa. Last year in Edinburgh I nearly had someones eye out when I stood on the one empty chair in the front row at a gig and spent around three minutes throwing flyers at the audience whilst screaming ‘COME AND SEE MY SHOW!’ Mind you, it was the most effective flyering I’ve ever done, we had at least seven in the next day.” 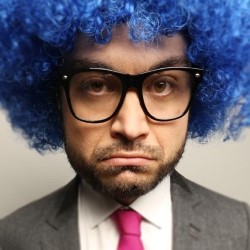