Absurdist comedian, Joey Page returns to the Edinburgh Festival Fringe with a silly, irreverent technicoloured extravaganza to make you forget about rising house prices or that row you had with your lover over dinner…

“Well last year at the end of my show I had a bit of a pre-planned break down and it was my favourite bit, so I have decided to get a bit unhinged much earlier on this year. So its part stream of consciousness and part quiz show because I have become addicted to them. The contestant doesn’t show up so I have a bit of a breakdown and then one of my heroes comes and tries to save it but makes it even more shambolic. It’s just a silly hour to make people forget about real life”

What is your favourite quiz show and why?

“It’s a straight fight between Bullseye and Catchphrase, though not with Stephen Mulherne, what a vapid man, I don’t know why they couldn’t have kept Roy Walker. I think they had an impact on my current career – if you think about the set and the idea of a cartoon Bull with a dictionary or a little yellow dome headed fella – they really grabbed my attention as kid. I still think the opening titles of Bullseye could give any surrealist a run for their money, the colours and animation are so fascinating.”

“Silly and meandering. I know I seem to get compared to Noel Fielding a lot for having worked with him and being from South London. Perhaps this is just because there really aren’t that many people, especially on the actual circuit, doing classic surreal comedy. I like to take people off in one direction and then about five minutes later have become totally removed from my actual point, then try and tie it all back up – its proper silly escapism. I like to try and bring people into my little world.”

“Sadly not. They are both such wonderful, successful comics but that doesn’t happen by accident. They work so hard, are so professional and on top of that two of the kindest people you will ever meet in the industry. It’s the more shambolic guys like me who go out drinking and partying that have the tales. I was doing some gigs in Switzerland with Pat Cahill who drunk on the way back to our hotel very calmly and in my view only. He then took his shoes off and launched himself, without warning, straight into a lake at 2am… just because it looked nice.”

“Wow, I am so far removed from actually being allowed to make that decision. TV is so utterly bland and people are afraid to take chances. I’m not being bitter but you will never get another Reeves and Mortimer or Bottom because there is so much red tape and people frightened to lose their jobs. Nobody will ever be allowed to make another Monty Python. If I was making a TV stand up show I would have Trevor Lock host it because he is so brilliantly off the cuff. He’s up here and doing a free show so go and see him. I’d have Oyster Eyes who are a brilliant surreal sketch group, like ABBA on drugs. I’d have Sam Simmons who is my favourite lately – you’ve never seen anything like him. I’d also have Andrew Lawrence and Andrew O’Neill. Oh and I’d have ermmmmm me, I’m amazing…… or in desperate need to sell tickets because I’m in debt.” 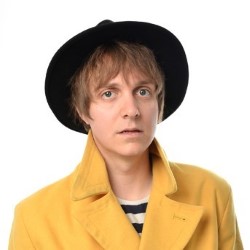