Acclaimed stand-up comic and accomplished TV writer Meryl O’Rourke has written some of the best gags on the telly. She’s currently writing a pilot sitcom for Radio 4 – when not being distracted by Twitter and late night interview requests.

You’re a stand-up, presenter and writer. Which role do you prefer?

“Stand up has my heart. There’s nothing like live, the interaction, the ad libs, the exploration, it’s like a game with the audience all on my team. I’m told I am very prized as a writer, but staring at a blank computer in my pyjamas is no kind of life. And TV presenting is wonderful until I watch and find out I look like teeth strapped to a Xmas tree.”

What kind of stand-up do you do and what kind if audiences do you get?

“I don’t have a remit, but it always turns out pretty confessional. I have a whole box set of trauma in my background so there’s always some morsel I can wrench from my soul for public mockery. That said I’m also observational – I like writing about telly because it means I don’t have to go out and have “experiences”.

“There’s no specific crowd, I’m pleasantly surprised by the breadth of my demographic, from 40 something mums like myself, teenage boys, burly loners, feminist students… My fan base surprises people – cos I swear a lot – my management in Edinburgh were constantly trying to drag young people into the show, but I was always most popular with cranky old Jews.”

I’m interrupting you as you’re writing a Sitcom. What can you tell us about it?

“It’s a pilot for Radio 4, but I’m saying nothing more until I’ve a broadcast date in the diary. I can say that it’s pretty deep and has been compared to Hitchhikers- not the radio series about space; the loners standing by motorways asking for death.”

As a person – very. I’m constantly furious with myself that there’s not more in my set. It’s hard to get it perfectly honed so you’re giving people a fun Saturday night out without them being lectured. That said, I consider detailing the reality of pubic hair removal to young men in the crowd just as political as if I said “what about Syria huh?”

If you were curating a stand up comedy show for TV. Who would be your guests?

The best thing about running my club at The Gorringe Park Pub, London Road, Tooting. First Friday every month, is booking people I love. Especially those who aren’t broadly known…so I’d book fantastic acts who have never got the attention they deserve by the flukes of this business, people Like Jo Romero, Suzy Bennett, Dan Evans and An Audience With Peter… spring to mind.

Will you be in Edinburgh this year?

Due to family commitments – mainly a breast addicted baby and a fed up sleepless husband – I’m only visiting for two days. So don’t need to ask anyone to see my show, just need to ask my collection of Scotland based stalkers to allow me to return to my loved ones for yet another year. 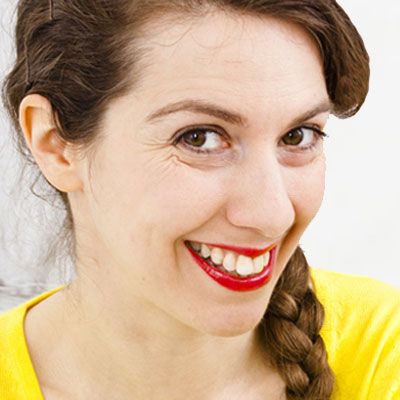