Over recent years, the Showstopper Improvised Musicals have become a Fringe institution. For 2017 they return to Edinburgh with their kids show. Ruth Bratt tells us more.

Hi Ruth, tell me about The Showstoppers’ Kids Show

The Showstoppers’ Kids Show is an anarchic musical adventure where we do WHATEVER the kids want. They imagine it, we do it. We ask the kids where they want the show to start, and they tell us the characters they want in the show, what they want to happen next, how they want the show to end. We’re entirely in their hands. For an hour they get to be in charge and they get a bunch of idiot adults at their beck and call. Plus songs and dances. What’s not to love?

It means an awful lot to the Showstoppers. It’s where our show really began and we owe so much to the Festival. We’ve spent a vast amount of our time there and we love coming back. We really love Edinburgh audiences and feel like it’s a home away from home in many ways. Plus we get to do the most fun thing you can do and still call it work every day for a month!

Mike McShane is a huge inspiration to all of us and is so important to the show. Along with the other improvisers in Whose Line who are up at the Festival this year – like Josie Lawrence, and Greg Proops, and Colin Mochrie to name but a few – they have always been so supportive and fun.

Portraying “The King of the Poos” is both of those things.

You’re talking to the wrong Showstopper! I don’t read reviews but I imagine our best one says something like “cor that was fun.”

Unhappy and a bit difficult.

Seven Lectures on Physics. You never know what kids are going to ask for, so best to be prepared.

Do you want to stop answering questions? Yes please.

It would be entirely improvised, but there would be musical section accompanied by the Chuckle Brothers eating noodles. 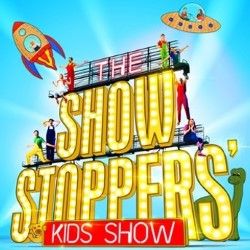